In this article, we are going to explain how to develop a burger-like menu which consists of a fixed button on the navigation bar which, when clicked, shows or hides the side menu containing a list of links, as can be seen below :

Figure 1. View of the desktop browser.

This menu is also responsive, so on screens less than 360px wide it takes up the entire page, like so: 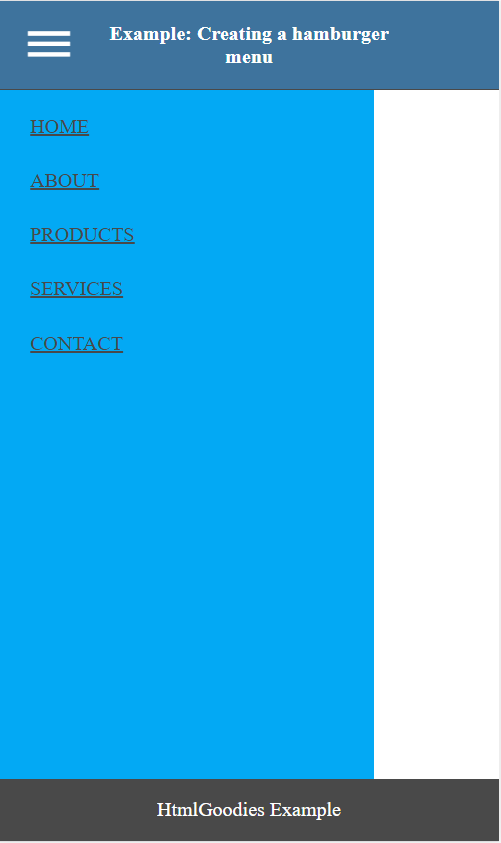 In the header of the page, we refer to our stylesheet (style.css) and both the stylesheet and the Google file containing the Material Icons type fonts. This font file is needed so that we have the hamburger icon in the menu. This reference was made with the tag as following :

In the body of the document, the main part is inside the tags

In the style.css file, the most important section refers to the formatting of the navigation block, which is originally hidden. This is done by setting its horizontal position as negative (-300px), as seen below:

Shortly after, we defined the menu_show this makes the menu appear when setting its horizontal position to 0. This class is added and removed via jQuery, and when this is done, the previously defined transition is triggered by performing the menu animation.

Finally, we have the media query which causes the menu to occupy the entire page in screens up to 360px wide.

To activate the menu, show or hide the navigation list when clicked, we use the jQuery library. here is click button event that contains the top class and jQuery’s “toggleClass”Function, by adding or removing the” menu_show”In the menu, making it visible or invisible, as follows:

And that’s all. Your menu is done in a few easy steps and works responsively.

Diogo Souza works as a Java Developer at Fulcrum Worldwide and has worked for companies such as Indra Company, Atlantic Institute and Ebix LA. He is also an Android trainer, speaker at events on Java and the mobile world, and DevMedia consultant.

New Google Play Store UI is killing the hamburger menu, for better or for worse

Source: Derrek Lee / Android Central What would you like to know Google’s new Play Store user interface is now rolling out to Android devices. The updated UI removes the hamburger menu and moves it to the profile thumbnail. The overhaul is already a point of contention for some. There have been rumors that Google […]

On the hamburger menu or not? The new addiction of web publishers to hide browsing

The modern publishing world means making critical decisions about things like burgers. In an era when publishers acquired the religion of design, the so-called “hamburger menu,” which appears as three parallel lines and obscures section navigation, has become a divisive tactic. It is presented by some as modern, mobile and minimalist. Others deride it as […]

With the last Google Maps update, you know, the one that brought in a new app icon, Google removed the ability to use the hamburger menu. Instead, a list of settings now resides in the account icon at the top right while adding an additional tab at the bottom. The next app to get a […]